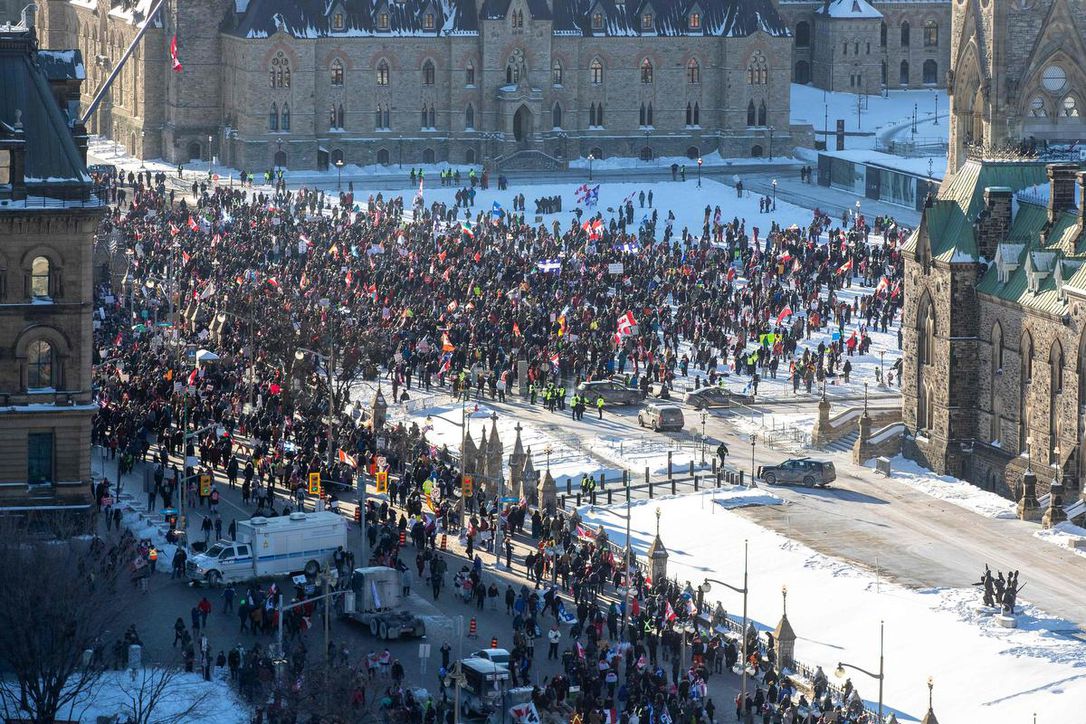 They say Jan 6 was a trial run, something to test the waters and see where the cracks are. Well it looks like the Canadian Trucker hoopla is yet another test case to see how many people you can get to take to the streets based on lies and misinformation.

How the Freedom Convoy came about is still unclear. Sure maybe some truckers organically started this but it was quickly usurped by losing right wing factions in Canada, two-bit right wing podcasters and ex-military, police and intelligence officers.  And if it stayed there it’d just be a Canada problem.  But it didn’t, it also became the newest cause célèbre for the American right wing media apparatus.  And just like Jan 6, where we saw people actually storm the capital based on nonsensical lies, thousands of people took to the streets because they believed in things that are basically just untrue.

Meet the Freedom Convoy.  Hundreds, or as they claim thousands, of truckers surrounded the Canadian parliament and shut down key border crossings. They had a simple demand, in their minds that is, that all covid restrictions and mandates should be lifted. 84% of Canadians are vaccinated and only 32% are currently voicing being sympathetic to the freedom convoy’s cause according to recent polls.  As an American the last thing I want to do is discredit people in the minority of anything from being able to voice their opinions. I’m even ok with super disruptive tactics to make a point. I’m fine with all of that, in fact, I would normally say kudos to these weirdos for pulling this off, even if I disagreed with them.  But I think there’s something else going on here. What may have started out as an organic protest morphed into something that felt more like a PSYOP and I’m certain we’ll see more and more of these.

While it attracted people who are obviously emotionally affected by the covid response it was guided by propagandists ranging from the so-called leaders all the way to FOX News.

The leaders included a science advisor for Trump, failed right wing Canadian candidates from a variety of failed right wing parties, ex-military, police and intelligence officers.  Even a former premier. Who knows whether they were in this from the beginning or jumped aboard as it started rolling along.  In any case watching their pseudo press conferences gave insight into how the overall messaging was laid out and how, at least in the United States, FOX News helped elevate their status and lay the groundwork for further action here and abroad.

Thousands of hours of video are available of the crowds that showed up for this and it’s  fascinating. For one, as expected, conspiracy theories and misinformation ran rampant. Including the very nature of the protests itself. Yes it was largely peaceful, why wouldn’t it be, the police didn’t force any confrontations. But it wasn’t legal, you can’t take over a ten block radius indefinitely and call it a right.  That’s not how these things work. But FOX News, the so-called leaders and their lawyers had the couple of thousands of regulars showing up, mostly on weekends, convinced that this was completely legal and within their rights.

Other things they believed were the following: That crime was down in Ottawa 90%.  It wasn’t, crime fell in the 10 block radius that became the worst dance party you ever saw, but of course it did.  Every cop in the city was patrolling it to keep an eye on this thing.

The cops didn’t want to arrest anybody. Sure, probably a good number felt that way, but it’s a fallacy to think you can break the law and because the cops agree with you you’re somehow in the right and not eventually going to get arrested. Then again though, give FOX News some due for floating the idea and seeing if it would actually stick.  Expect more of that going forward. They would have loved it if the cops switched sides.

It is a worldwide movement and everyone is waking up.  Actually it’s just  the same people over and over  again, but I get it they really feel like they represent everyone. It’s a big part of the allure.

And then this one. It’s a kid safe environment because they are good people. They’re cleaning the streets, they’re keeping everyone safe and they’re in the right, so of course this is safe for kids. That’s right and this is where it gets concerning. Some people brought their kids there for weeks. Toward the end as the arrests were starting the police had to issue warnings to tell parents to take their kids from the area because they were worried that the children were being used as shields.  In fact the organizers and local radio hosts were encouraging people to bring their whole families even after the police announced that they were going to clear the area of vehicles and protestors. There were dozens of interviews with people with kids who proclaimed that it was a kid friendly environment and they had every right to bring their kids.  Seemingly completely oblivious to the reality of the situation.

The reality is that this had become an illegal occupation of public spaces. Which for an afternoon, or even a weekend, is a pretty legitimate protest, but after a few weeks? Any seasoned protest organizer would know that the tactics needed to stay there would be either dangerous or very diplomatic, or both. And anyone who thought it was fine, or even smart to bring kids at this point, would be delusional at best, or trying to use it as a tactic at worst. But that is what happened and many people started claiming that the government is coming for the truckers’ children.  That everyone’s freedoms are being trampled and they’ll even take your children if you don’t get in line. Who would say such things you might ask? Tucker Carlson, that’s who.

So that’s where it gets crazy, literally.  You have people showing up thinking they’re taking part in a love fest that no one in their right minds would ever object to and they’re willing to put their kids at risk believing this fantasy. Just like others thought it was ok to storm the capital. It’s not a protest movement, it’s a zombie protest. And obviously you had organizers and people like Tucker Carlson egging on this delusion. Very soon we will have even more people showing up in American cities, believing whatever nonsense the next wave of agitators, like Steve Bannon, or whoever it may be can fool them into fanatically believing. The next wave of protests, likely throughout this Summer, will not be a contest of who’s ideology is best for our country.  It will be fact against fiction.