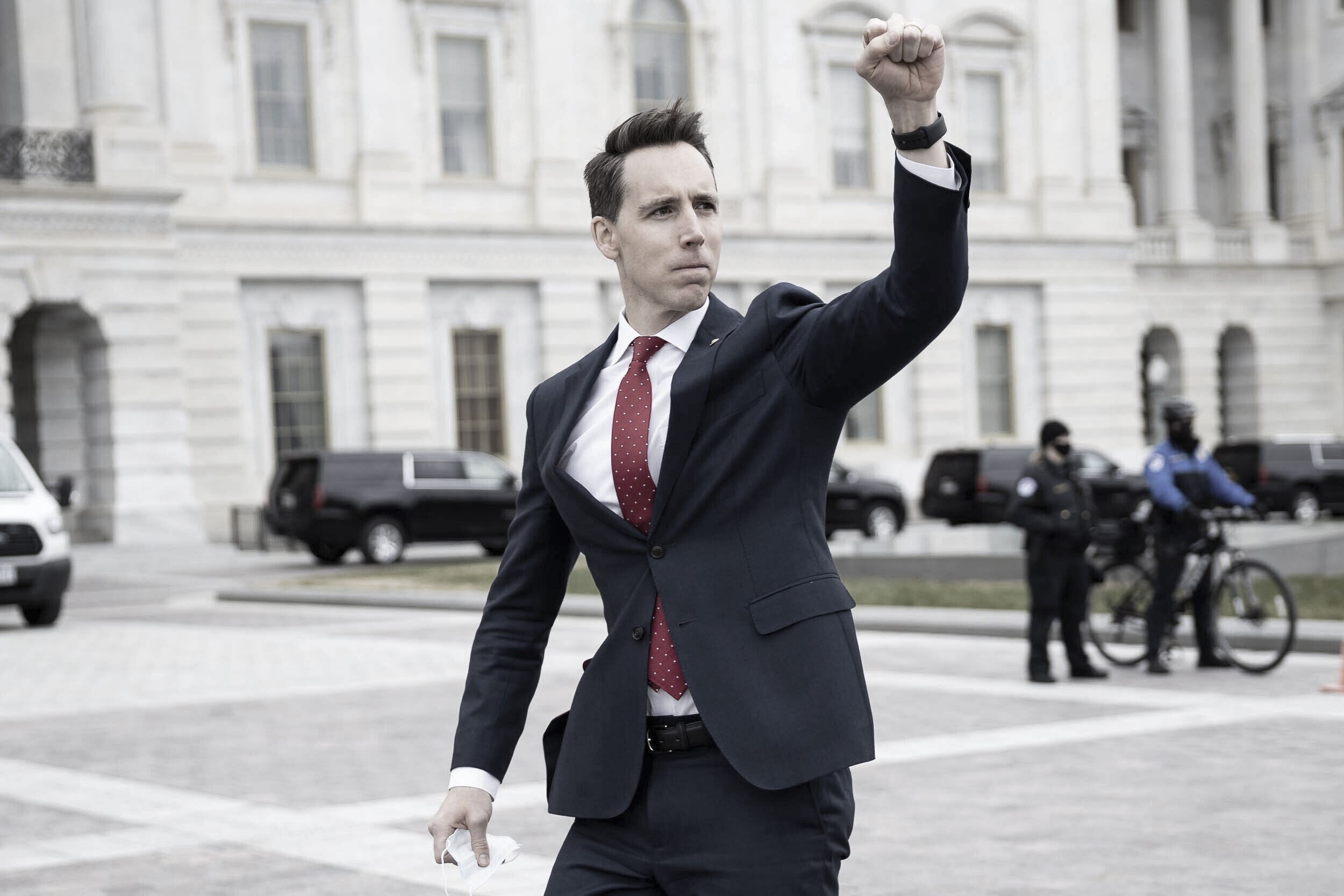 Last year Trump blinked.  As it turns out he blinked because too many of his foot soldiers got cold feet and for good reason. Some essential ingredients weren’t in place yet. That won’t be the case in 2024. As senator Jaime Raskin said, “The single biggest predictor of a successful coup against a government .. is a recently failed coup.”

For example, what if Sean Hannity had encouraged Trump instead of freaking out? Or just a few key state legislators had delivered alternate electors as the coup plotters had hoped? Many stood their ground, like Ted Cruz, who faithfully was obstructing the process as was his role in the plot. Well as multiple news reports have outlined, especially Barton Gellman’s piece in the Atlantic: Trump’s Next Coup has Already Begun, everyone’s resolve has strengthened in the past year and the proper measures are falling into place. Especially when it comes to state legislators who are giving themselves a variety of tools to control who wins in key battleground states regardless of what the vote will actually be.

Well here we are one year later.  A year ago everyone was in disbelief that we could have in America what has happened in many other countries.  A bloodless coup, or a stolen presidency, or whatever you want to call it.  Now everyone is talking about it like it’s some sort of horse race.  Will the Republicans pull it off or will the Democrats find a way to convict the people who actively tried to keep Trump in power and will do it again if not stopped? Why are the committees so slow, how come we can’t get Mark Meadows to testify, ooh did you see Sean Hannity’s tweet?

So now we have tens of millions of people living in a fantasy world who will praise the coming coup and tens of millions of people casually talking about this thing as though it is inevitable.  It’s looking very likely, but it’s by no means inevitable.  However, it’s not going to be enough to just steal one election to make future elections impossible to win. The Republicans are also going to need to destroy any semblance of an opposition party and they’re going to need to dismantle any legal means that could threaten their hold on power. And that’s what they’re already talking about, of course they are, it’s kind of coup 101. Just like last year when nobody thought a coup was possible we now have to wrap our heads around what phase two will look like.

So to cut through some of the muck I thought we could have a quick score card and recap the state of play.

Team Republicans are not playing by any of the established rules. This is how governments go from being generally legitimately elected to becoming autocrats. They haven’t drifted to the right, that makes it sound like they are still in the spectrum of what we would consider acceptable politics. No, they’re an illiberal party who thanks to a demographic shift can now no longer win a majority of voters and have no choice but to end any attempt at an actual self-governing population. At this point all they have to do is run out the clock on November 4th and take the House of Representatives. Then everything stops and they set up their investigations.  Which won’t be legal, will be based on lies, and will be quite swift. It’ll be Benghazi to the Nth degree. All you have to do is listen to what they are saying at their press conferences to know what they are planning to do. They’re endlessly talking about impeaching Biden, putting Adam Schiff on trial, ousting Democrats from committees and investigating anyone who stands in their way. They’re also accusing agents in the FBI and CIA of conspiring with Democrats to create the Jan 6 insurrection so that the DOJ could go after Trump supporters and are vowing to investigate and purge the agencies of bad actors. I’m not kidding, read that last sentence again, they say this stuff in press conferences.

Team Democrats, who are the worst team in the history of all teams except for the other current team who isn’t even a team anymore since they’ve left the field and have cut off the power and padlocked the doors, are playing by the established rules.  So they have proper legal committees and investigations and all of that stuff and it’s moving at the general speed that these things move when you play by the rules.  And that begs the question.  Can you actually win in a contest like this when you play by the established rules but your opponent has pulled out all of the stops? Or do you lose as soon as you abandon the rules? Does every option lead to loss?

We don’t want to look like a country where you can jail your political opponents. But if the Republicans take the House in 2022 they will be in a great position to take the Presidency and the Senate in 2024 with the methods they failed to pull off in 2020.  They might even just win outright because of the amount of voter suppression and gerrymandering in place and not have the resort to their more outlandish methods. And as soon as they have all three branches it’s really on because this time they’ll be emboldened enough to really politicize the DOJ. And as we’ve already seen there are people at every level in every part of our government that are willing to  jump aboard this train.

And that brings us to how they stay in power afterward. They can’t really afford to have a true opposition party and they’re not going to just sit around and let the Democrats continue to appeal to the masses that are much larger than their base.They also can’t have an independent DOJ or prosecutors all over the country trying to derail their gains.  That’s why they’re constantly talking about prosecuting Democrats and purging the FBI. It will all be based on fabricated conspiracy theories but as soon as they can politicize the DOJ they’ll do it and all of this crazy Benghazi like stuff could turn into actual prosecutions.

So how will this happen? We have tons of examples throughout history. One political party captures enough of the population’s support and becomes strong enough to change all of the rules to stay in power. And while doing this they delegitimize anyone or any entity that gets in their way.

Let’s take Fauci for example, they’ve turned him into a flash point solely because it really excites their base. That’s really the only reason they go after him and that’s how cynical and ruthless they’re willing to be.  Right wing news outlets run crazy conspiracy theories about Fauci accusing him of funding a Wuhan lab that created covid and saying he is now covering it up. Senators like Rand Paul repeat these theories in Senate hearings and threaten to investigate as soon as they take back the Senate or the House. That part has already happened, Rand Paul is actually fundraising on the message that Fauci should be criminally charged. So will they actually do that? Of course, as soon as they have the chance.  But can they actually prosecute? Maybe, we’re about to find out, that depends on what happens within the DOJ.  But also maybe they don’t have to.  Maybe Fauci is old enough and out of concern for his family, who are already receiving death threats, just retires.  And that deters future Fauci’s from doing their jobs.  I just wanted to say future Fauci’s, doesn’t that have a nice ring to it? See how that works? You can just start intimidating everyone until they back down and then others back down before even making a stand.

Ok, what about Adam Schiff? Let’s say they follow through with the threats they’ve been making for years to investigate Adam Schiff.  He doesn’t retire, he fights back, thinking there’s a system that can protect him because he knows that the truth is on his side. Does that system protect him? Will it still exist? Or will there be enough people within the DOJ to prosecute, enough judges to convict?  Will they have the ability to shout down enough people to get what they want? I don’t know but if the Republicans take the house in 2022 and do what we all expect them to do then we’re going to find out. And once again, will the players who play by the rules be able to stop those that aren’t playing by any rules other than whoever wins calls the shots?

Can they really politicize the FBI? Cheney bullied the CIA and other intelligence agencies to give him enough cover to invade Iraq and got away with it. Bill Barr covered for Trump on numerous occasions and then just bailed when the whole thing got too hot with no ramifications. There are Trump supporters at every level in our government and they seem to be more and more willing to accept this new reality as a viable option. Or at least there are many that are expressing this sentiment publicly. So I don’t know, I would hope that they couldn’t weaponize the FBI, but I don’t think we’ve seen anyone stop them yet and they’ve taken this farther than anyone in our history.  Even the confederates were just going to leave, they didn’t try to take the whole thing.

Republicans have already said they will strip all democrats of their committee posts.  So if they do that and then investigate and possibly prosecute key democrats what will happen to the party as a whole? Do people like Manchin and Sinema join the fight against autocracy? Or do the likes of them become the new figureheads of the party? Because right now it seems like those two in particular are hedging their bets and securing their place in what may very well happen. No one outside of the Republican party is going out of their way to offer credibility to the republicans than those two. Do they really not see what’s happening? What’s wild about reading through some of the possible scenarios is that does anyone really expect the republicans to not follow through with what they are already saying they will do? Is it just so absurd that it’s hard to believe it can actually happen? Maybe.

So the race is one.  November 8th is the deadline.  If the Jan 6 committee and Merrick Garland can’t land some wins by then and the republicans win the house back then we’re about to find out the answers to all of these questions.