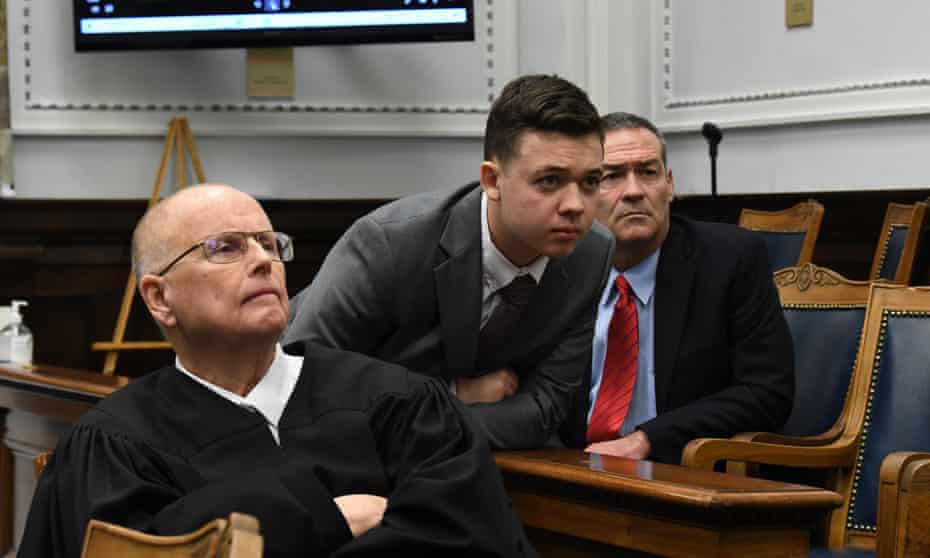 It’s easy to dismiss this Kyle Rittenhouse trial for being the sham that it is. But it’s also a blueprint of the coming trials when the republicans take over again.

The trial itself hinges on whether Rittenhouse was attacked without provocation or not in order to prove that he was acting in self defense. Before we get into the elephant in the room holding an illegally obtained and operated ak-47 there’s another point to make. I’m not really as interested in the exact facts of the case, it’s pretty obvious, it’s more what is surrounding this case that’s a harbinger of what’s to come. Ok let’s bring out the elephant.

Kyle Rittenhouse is delusional. For years he had believed that local police and firemen had been training him to be some sort of first responder.  He thinks he was a cadet in training, was issued a bullet proof vest, and was receiving ongoing education of some sort. But none of that seems to be real. He thought it was ok to drive without a license because he was driving to work and that a friend could buy him an AK-47 to use legally until he turned 18. I’m not saying this to diminish his credibility like the people on the right are doing that to his victims.  I just think it shows he’s susceptible.

He showed up in Kenosha thinking that he and the other hundreds of militia-like folk were there to maintain order from a lawless mob that the regular police couldn’t contain. So he reacted to the right-wing propaganda filling social media and cable news like many others did. Propaganda that painted the town as being overrun by a liberal mob encouraged by the democratic party’s crusade against police. And this has been reinforced ever since with bail money and right wing media making this kid out to be a hero who stood up to socialists trying to destroy this country.

The reality is the Kenosha police were in charge there.  They made decisions.  They accepted help from the national guard.  They did the planning.  And they weren’t coordinating with the militias.  They weren’t afraid of the militias because they’re fine with the militias but they didn’t ask them to come.  It was hardly the lawless breakdown of society with police hiding in bunkers or something and needing the militias to come down from the hills to save them.  They had tanks, they had tear gas and plenty of guns.

So this kid didn’t know what was happening and couldn’t fathom why he might seem inherently threatening while walking around with an ak-47, especially when the police seemed fine with his presence. And what seemed to have happened is that a mentally impaired individual confronted Rittenhouse during some sort of psychotic episode, quite possibly invoked by Rittenhouse and others parading around with AR-15s.  Rittenhouse kills him because he’s looking for an enemy, he thinks there’s enemies all around him. He went there to defend the city from people he viewed as lawless rioters with no regard for anything. That was the narrative that motivated him and others to act.  A narrative believed by millions of people and endlessly reinforced by the right wing media apparatus and Republicans in congress. Right? Just like January 6th? Just like the current stolen election narrative?  These words have consequences.

So when people try to apprehend him he thinks he’s in danger of being killed, so he kills the people trying to stop him. And to him and his supporters that’s the story.  He went there to take the law into his own hands because the place was lawless. But apparently everyone else there had no right to do anything when confronted with an active shooter actually killing people. See the disconnect? Rittenhouse and his supporters don’t.  That’s part of the delusion, they’re on the good side, they have the right to defend themselves. They have the right to act first, and if anyone fights back they have the right to claim it was in self defense. And that right is based on a mass delusion that currently we still make jokes about on late night television even though people are dying because of it.

Now Tucker Carlson probably knows the difference but does the judge at this trial? Seriously, this guy is a walking contradiction and he clearly believes that there is some question as to who was the aggressor here.  He has a Trump rally ringtone on his phone.  He allows obviously bogus witnesses to take the stand and lie.  He let’s Rittenhouse lie. He accepts bizarre technical theories that are easily refuted to discredit the industry standards of forensic imaging. He berates the prosecution for calling out the outright deceptions put forward by the defense. But I don’t get the sense that he’s really knowing that his version of reality is not correct. I get the sense that he firmly believes he is being fair and that’s our real problem here. The delusion that so many players on the board are in the midst of. What else does he believe? Was the election stolen?

Thousands of people have been angrily calling the 13 Republicans that voted for the infrastructure bill, and some of it is death threats.  And while doing so they are citing all kinds of false narratives and outright delusions. They’re crazy right? Sure,but dozens of Republicans in congress are also denouncing their fellow Republicans for voting and calling for them to be stripped from committees or impeached. Are they delusional or just love the game? I’m sure it’s a mix.

See what’s going on?  It’s one thing for Kyle Rittenhouse to be delusional but what happens when the judges are, and the lawyers, and the experts, and the politicians, and law enforcement, and all kinds of people in positions of power ready to fully believe that they’re right yet be completely out of touch with reality. Or for some of them they just love the game.

Oh did I ask what happens? Trials like Kyle Rittenhouse are one example.  Just the first of many. Let’s see what happens when they put Adam Schiff on trial and it’s all about this bogus steele dossier and secret meetings and FBI agents conspiring to take down a President. And some judges go along, encouraged by right wing news, all of the Republican party, millions love it and demand he’s thrown in jail.  You get a grab bag of officials going along all while claiming the Democrats are obstructing justice. Oh and that’s what they think the Democrats did to Trump so now this is the payback.

If you don’t think that’s possible we just watched a judge accept an argument that the industry standard for forensic imaging is unreliable when presented by the side he clearly opposes but is perfectly fine when presented by the side he obviously prefers. Right wing media has been glorifying Rittenhouse and demonizing his victims for a year. Prominent members of the  Republican party have been calling him a hero who died standing up to the left wing socialist mob. And, millions of people are rooting for him to get away with murder.  And either way the Republicans win this one.  If by some miracle he’s convicted he’ll be a martyr that they can parade around to their base.  If he’s let go he just proves to millions of their believers that the socialist conspiracy against America can and will be defeated if they stand up and fight.